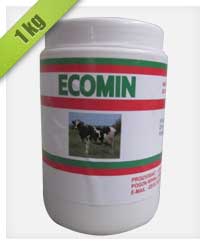 ORGANIC PRODUCT
■ Uses for pigs, cattle, sheep, poultry and fish
■ Effectively prevents the development of mycotoxins
■ Absorbs harmful substances from the body: heavy metals, toxins, pesticides and other toxic elements
■ Maintains a stable state of health of animals and thereby contributes to a lesser use of drugs
■ Increase the quantity and quality of the resulting milk, meat and eggs for 6-8%
■ Accelerates fattening of the animals

ADVANTAGES OF ECOMIN
■ Performs detoxification of the feed - binds mycotoxins and other harmful substances that pass through the body on its structure without harmful effects on the growth of animals.
■ Absorbs ammonia, hydrogen sulfide, carbon dioxide in the digestive tract.
■ Reduces unpleasant odors in the environment.
■ Improves the feed conversion
■ Reduces the concentration of parasitic bacteria and the risk of disease
■ Reduces diarrhea
■ Increases the body weight of fattening pigs 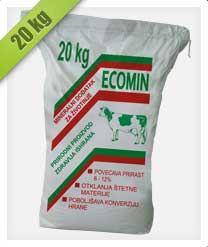 HOW DOES ECOMIN WORKS ON ANIMALS?
When ingested, ECOMIN in a short time (4 - 6 hours) binds harmful substances and through feces, urine and sweat discharge it from the body. The principle of ion exchange allows zeolite to selectively absorb mercury, arsenic, cadmium, strontium, chromium, lead, aluminum, ammonia, radioactive substances, UV radiation, the components of viruses and other harmful substances, which are all positively charged from the body. It should be noted that, among others toxins, zeolite binds mycotoxins - fungi toxins which are most damaging aflatoxins (B1, B2, G1, G2). Zeolite absorbs about 90% of aflatoxins and others such as ochratoxins, trinotecens, zearalenone, fuminozine absorbs up to 30-50%. Regular use of zeolite in animal nutrition helps preventing the growth of mold and thus prevents the occurrence of toxins. The only natural substance in the world that successfully removes toxins from the body is zeolite. 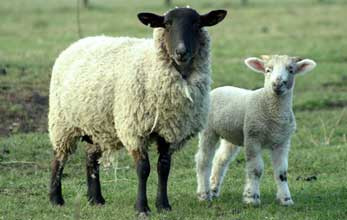 Zeolite is the strongest antioxidant because it neutralizes the effects of free radicals generated by stress, pollution, radiation, malnutrition. Free radicals are unstable molecules that react easily with other molecules by taking their electrons and that damages the healthy cells, DNA chain is broken and that can cause death of the cell. The consequences of that are various diseases: cancers, heart disease and blood vessels disease, liver disease, weakening of the bones. Zeolites give electrons to free radicals, stabilize them and prevent further damage.

Animals fed with ECOMIN gain weight because zeolites contain macro and micro elements and with ammonia in its structure allow animals to utilize nitrogen more efficiently. Zeolite with NH3 is used as a substrate for growth and cultivation of the bacteria which influence the health of animals and regulate the pH of the intestine. Cows fed with zeolite are healthier, have an increased content of fat and calcium in milk and zeolite significantly reduces the occurrence of milk fever and ketosis. It reduces the number of nematodes in animals that were fed zeolite. ECOMIN prevents anemia which occurs due to lack of Fe. ECOMIN reduces the appearance of rachitis in animals. The presence of calcium and phosphates in zeolite has positive effect on the thickness of the egg shells. Zeolites bind bile acids to their grid. All these positive changes in animal organisms contribute to improving the overall results (average increase increment 6 - 10%). Quantity and quality of the end products of meat, milk and eggs is increased. The most important thing is that the product has no residues of harmful substances and practically zeolite produce healthy food.

ECOMIN IN ANIMAL HUSBANDRY
In recent years, special attention is paid to the natural minerals in the diet of domestic animals. ECOMIN consisting of natural minerals. It is a mixture of alkaline and alkaline earth aluminosilicate and some of them are clinoptilolite and montmorillonite.
Natural minerals protect animals from the accumulation of harmful toxic substances, such as lead, mercury, cadmium, and on the other hand act as adsorbents of the mycotoxins and gases in the digestive tract and the environment where animals are kept. ECOMIN is used as a feed additive for the purpose of detoxification because it binds toxins and heavy metals for its structure and prevent the development of fungi and bacteria. Minerals do not leave residues in milk, eggs, meat. It increases function of digestion, as well as better feed utilization and thereby enable faster increase.
It is recommended adding ECOMIN in animal feed daily because grains are often infected by fungi, barely visible, but in low concentrations they cause a lot of damage on farms. ECOMIN is a natural product that effectively prevents such infection.

The composition, method of application and the declaration is on the label.